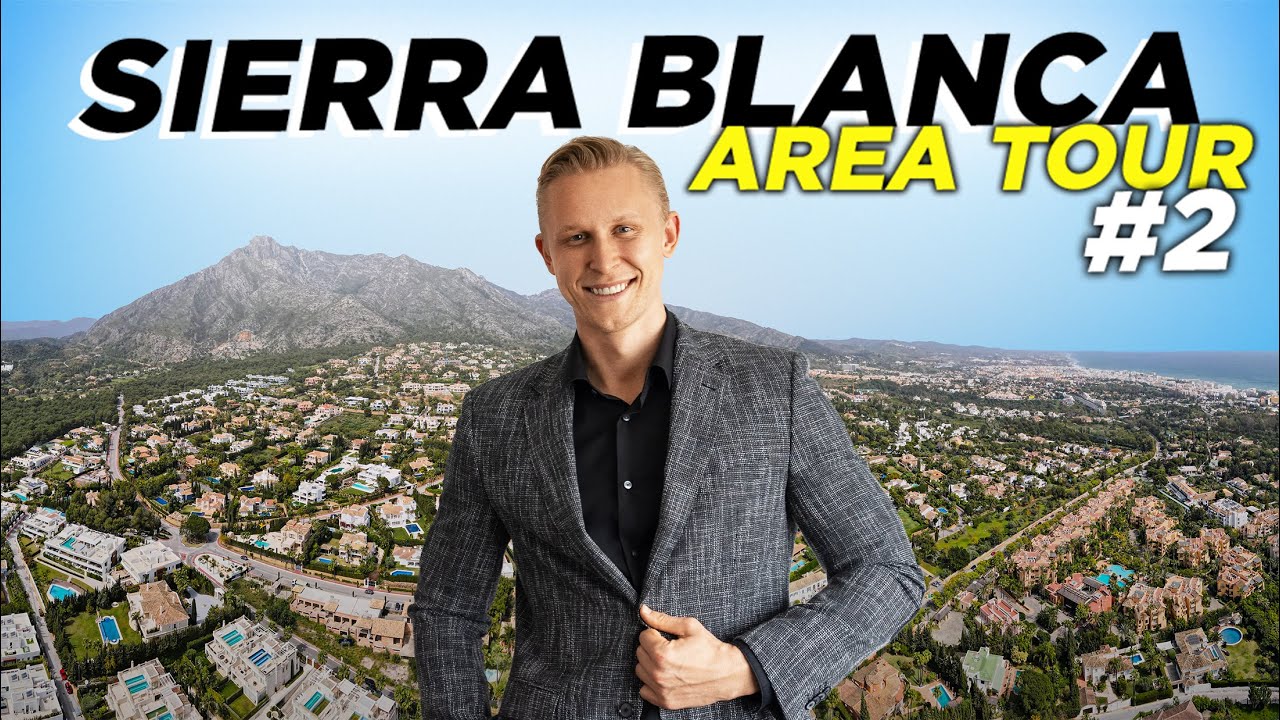 A 4km drive from the serene coastline of Marbella, you will arrive at one of the most prestigious areas in the whole of Marbella, Sierra Blanca. Immediately, the word “security” comes to mind. What you will notice are security gates that automatically open throughout the day, not restricting movement of those just passing through. However, the more you explore, the more secluded gates and enclosed residential streets you will come to find. In fact, there are 24h security and CCTV cameras all over Sierra Blanca.

Sierra Blanca consists of approximately 250 houses; taking up most of the allocated land and leaving very few plots to build on. It is worth mentioning that the price per m2 of land goes for €1000. What is considered a small plot here would be 1.200 m2 and can go as far as 1.8 hectares. However, on average a plot is around 2.000 m2. Naturally, the houses are built much closer to each other when comparing them to La Zagaleta. Regardless, you still get incredible amounts of privacy and spectacular views. Don’t forget, this is Marbella’s way of conceptualizing luxury city living.

Driving through Sierra Blanca is a luxury because you can really get a feel for the prestigious atmosphere. Here is a fun fact, all the streets are named after great musicians and composers like Mozart, Bach and Chopin. Wide pavements and streets, along with imposing property facades everywhere you look. The residential area of Sierra Blanca nests at the base of La Concha Mountain, which is part of the Sierra Blanca Mountain range, and is even considered a protected green zone.

Property prices vary from 2.000.000 € euros for the cheapest unit up to above 20.000.000 € for the most expensive ones. The medium price would probably be around the 5-6 million mark. Same as in La Zagaleta sales are currently going very well in the luxury sector of Sierra Blanca.

You could say that when it comes to Sierra Blanca, Drumelia is the expert, as we have sold over 30 properties in the area. In fact, all the sales made from February to March this year were done by Drumelia. For example: 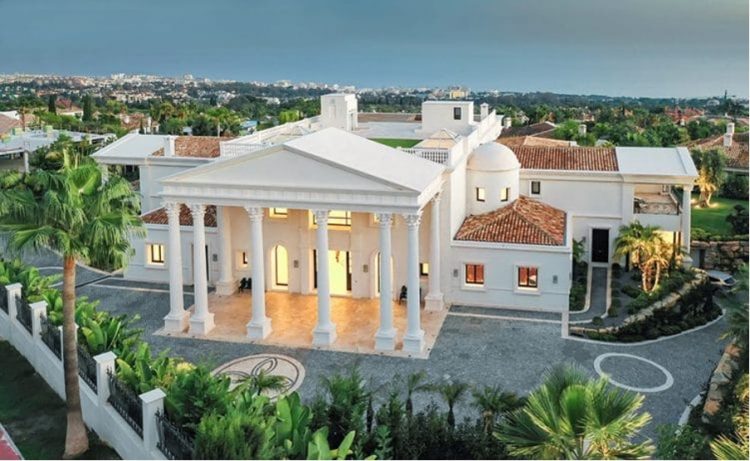 We sold the most elegant classic mansion in Sierra Blanca. In 2019, Forbes valued this property at €40.000.000, even though this figure does not reflect the final selling price, which remains our little secret. Also, we sold our famous Villa Symphony, which was listed exclusively at €13.500.000.

And, just last week we sold another beautiful Andalusian estate that was listed at €9.500.000, on a plot of 4.200 m2. So, you can see how the market moves very actively, to the point where we have a shortage of listings in Sierra Blanca! So, if you were thinking of putting your house for sale and were doubting, then maybe this is the right moment to do so!

NEW LISTINGS OF VILLAS FOR SALE IN SIERRA BLANCA

This is one of the newest listings in Sierra Blanca, a brand-new 2.000 m2 villa on a 3.000 m2 plot with an asking price of around €15.000.000. We are now currently overseeing options with the owner to possibly furnish the property, but you can still appreciate the property’s architectural details and views.

Currently, we are in the process of listing two more properties in Sierra Blanca in the same price bracket, so stay tuned for more videos! Also, we putting in an enormous amount of effort to provide you with the most enticing content and insights into the amazing world of Real Estate in Marbella, which we have had the pleasure to be part of for more than 20 years.

Here is one of the most anticipated brand-new villas that will hit the market at an estimated asking price of €13-14.000.000 euros very soon. It has picturesque sea views from the ground floor, which for those of you that don’t know, is highly sought after in Sierra Blanca. This is because almost all houses have sea views from the first floor, but much fewer have sea views from the garden, so it is only natural that properties like these are based at a higher price range.

Within a lower price range, we have the brand-new villa that we previously toured on our YouTube Channel, although the price has been adjusted to €8.995.000.

A couple of nice modern listings that are rented or can’t be accessed now are properties D005 and D2086, as a reference to the market.

Further down the budget line, we have this Andalusian style well-built villa currently for sale at €4.300.000 with beautiful sea views! Very private, and set in the heart of Sierra Blanca.

And last year’s sales examples (D1859 and D1542) of several similar projects prove that the value of such a brand-new house will be around the €6-7million mark, depending on the final result. Some of our clients invest in these types of properties to partially use them with their family, but also rent them out short term during their absence, creating some extra income.

The cheapest in terms of modern houses currently would be this property. 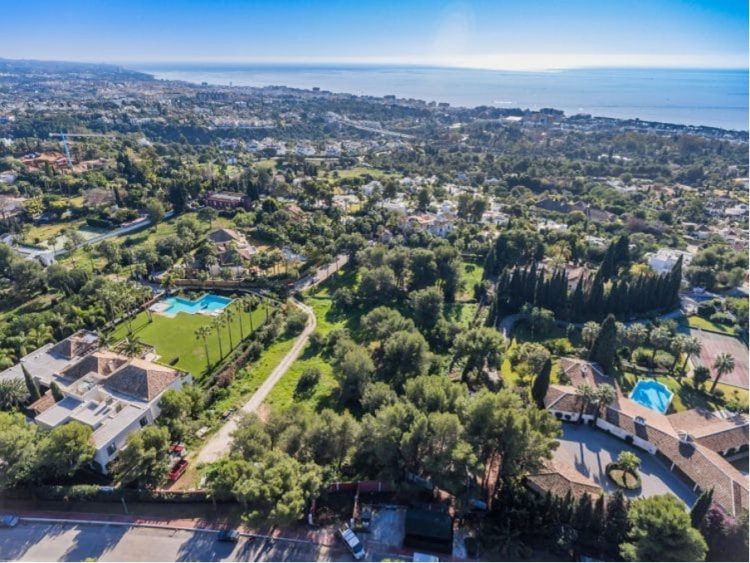 As we drive past a plot that we sold back in the days to some investors, you recognize its size of approximately 30.000 m2, and the project management helped develop 6 mega-mansions for private use. That was a massive deal and speaking of such, it’s also worth mentioning that the 50.000 m2 plot was also sold by Drumelia. It has amazing sea views! And in the near future, if someone is interested, we just obtained the building permission for 5 modern villas in the southern part of Sierra Blanca, with unprecedented sea views.

LUXURY APARTMENTS AND TOWNHOUSES FOR SALE IN SIERRA BLANCA

Not only can you find villas and mansions in Sierra Blanca, but Andalusian style apartment blocks where you can find units between €400.000 – 1.000.000 approx., depending on what you are searching for. And there is a modern townhouse community.

Currently, the best-priced unit is this 2-bed modern townhouse at €850.000. It has 3 floors, 2 bedrooms upstairs, an open-plan living/kitchen, sea views and your own garage for two cars.

And our personal favourite unit is this €3.100.000 completely refurbished townhouse/villa, furnished by a top name in the Marbella design industry: Pedro Peña. Over 500m2 of internal living space comes with a private pool and sea views inside a gated community that offers security, 3 indoor pools, a spa and beautiful gardens!

GATED COMMUNITIES NEXT TO SIERRA BLANCA 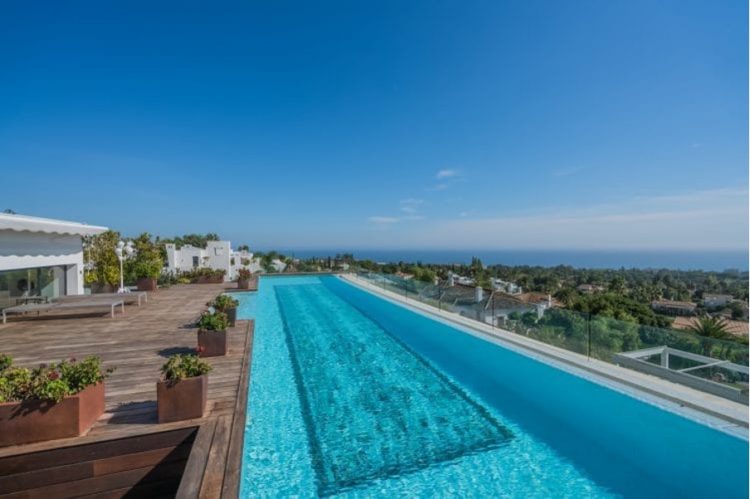 Real top-level open-plan spaces, height of ceiling is fantastic, 3 bedrooms on the top floor and the 4th downstairs. Penthouses have the same layout on the main floor, only adding a terrace upstairs. Prices are between €2-3.000.000 mainly. We actually sold 6 of these units to our clients. And then resold 2 more again! It was built around 2015, and if you like this concept, the developer is building another similar project right now to be delivered this year, with even higher finishing! What makes living in and around Sierra Blanca so great is how close everything is.

SCHOOLS NEXT TO SIERRA BLANCA AND OTHER POINTS OF INTEREST

Swans International Secondary School, one of the best schools in Marbella, sits 1 km away from Sierra Blanca. The Swans Primary School is 2.2kms away, nesting at the bottom of the Golden Mile. Furthermore, Marbella International University Centre is 1.4km away. Talk about some great education!

The famous Buchinger Clinic is 750m away. The famous 5-Star hotels: Puente Romano and Marbella Club are 4km away. Within these hotels, you can find Michelin star Restaurant Leña by Dani García, and other restaurants like Serafina, La Milla, Sea Grill and Celicioso! Marbella Centre is a convenient 2.5km away. Puerto Banus and El Corte Inglés Shopping Centre centre is 7 km away. Aloha Golf Club is 5km away. In short, everything you need is within a 10km radius!

We hope you enjoyed learning a bit more about the lovely Sierra Blanca area. We wish you all the best, and once again it’s a pleasure to have the opportunity to show you our beautiful real estate world!

What is Sierra Blanca?

Sierra Blanca, which directly translates to “White Range”, is a mountain range located in the Costa del Sol, and is the closest mountain to Marbella. It is referred to as a white range due to the lack of vegetation on its slopes, which leave a grey Limestone rock. Although the base of the mountain range has been converted into a high-class residential zone, Ecologist organizations have proposed that the mountains be declared a protected area. The famous LA Concha Mountain is actually part of the Sierra Blanca mountain range.

Does Marbella have a Microclimate?

Marbella is famously known for having pleasant weather all year round. And, this is partially due to the coast’s geography. Sheltered by the peaks of the Sierra Blanca mountain range and nestled by the Mediterranean Sea, Marbella enjoys a constant microclimate. This means that when surrounding areas experience cooler, or windier weather, the town is protected from such extremes.

Can you climb La Concha?

La Concha sits in the Sierra Blanca mountain range and is the symbol of Marbella. Apart from giving every property in Marbella something to admire from all angles, it is a great way to get some outdoor activity in! On the mountain, there are many hiking routes you can take to get to certain peaks, the most notable being El Cruz de Juanar. The hike is around 2 hours to complete the uphill walk, then less to get back down. Other enjoyable paths are to the peak of La Concha, for those who enjoy a challenge.

What to do around Sierra Blanca?

Sierra Blanca sits just off of the famous Golden Mile, so it is safe to say that you will never fall short of things to do if you are in Sierra Blanca! On the Golden Mile, you will be able to find everything from Michelin Star restaurants to five-star hotels. Marbella Centre is a mere 2.5 KM journey, and Puerto Banus is only 7 km away! Having two of the most important areas in Marbella for entertainment at your doorstep is extremely convenient! Plus, Aloha Golf Club, one of the largest courses in Marbella is 5 km away, so if you are the sporty type there are plenty of outdoor activities for you to indulge in!

properties for sale in Sierra Blanca

17950000
This stunning 3-level mansion for sale is one of the most outstanding properties in the super exclusive area of Marbella and all the Mediterranean region, Sierra Blanca. Nestled...

19000000
A perfect paradise for those looking for privacy, luxury and comfort! The chic mansion for sale is located in the ultra-prestigious and gated residence of Sierra Blanca, one...

2950000
This breathtaking modern duplex penthouse can be found nestled in the a-class residential community, Sierra Blanca. When talking about views, the penthouse offers the best of...

7800000
This one-of-a-kind contemporary villa for sale is located in the prestigious gated community of Sierra Blanca in the upper part of the famous Golden Mile of Marbella. Ready by...

1950000
This stylish modern house for sale is set in a brand-new development of 4 townhouses with high qualities in a prime location, Sierra Blanca, Marbella’s Golden Mile. Each...