The weather and seasons in Marbella

Marbella is one of the most prestigious and rich resorts on the southern Spanish coast of Costa del Sol. The city stretched for 28 km along the coastline, with gorgeous villas, where world famous stars and royalties live. This resort gained its popularity mainly due to pleasant sunny weather throughout the year. We are going to tell you about the climate that is waiting for you if you want to go to Marbella on a permanent-time living or just to have an eventful vacation.

General information about the climate in Marbella 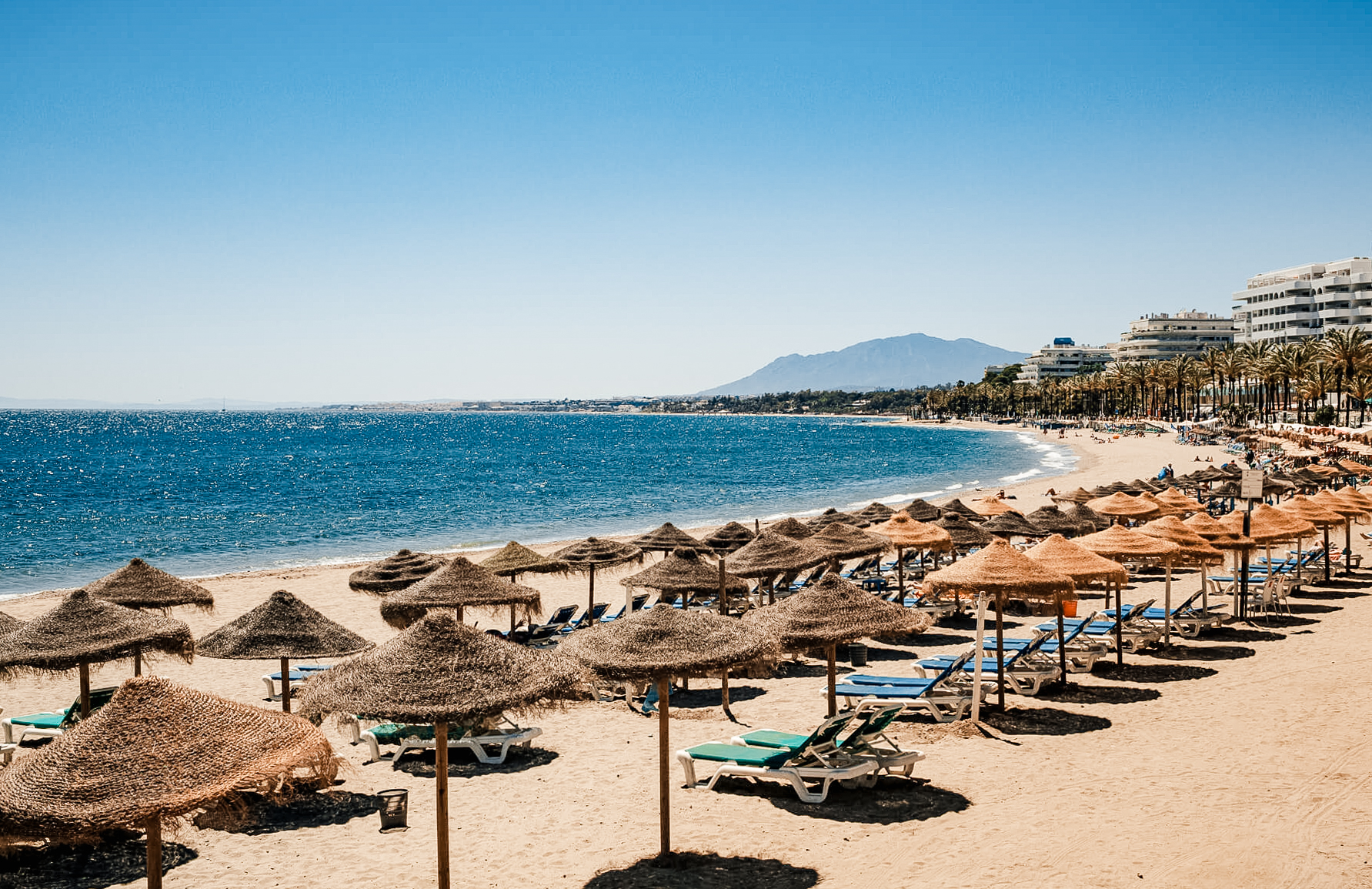 No wonder Marbella is called the green oasis of the south of Spain. Pleasant microclimate and plenty of warm sunny days (about 320 days a year) are related to the location of the city. The southern warm air flows from the Mediterranean Sea and Africa influence the climate of the resort. Meanwhile, the Sierra Blanca range protects the city against the northern cyclones. At the same time, it can be windy and cold in the Strait of Gibraltar, and there can be heavy rains and high waves on the coasts of Fuengirola and Paseo Maritimo. Nevertheless, the weather in Marbella would be calm and pleasant.

The summer in Marbella is mild and the winter is warm. That is why you really need some light clothes and a headdress during the summer season there. Meanwhile, it is totally OK to wear a T-shirt and shorts within a few days in winter. Only at night, you might need to wear a warm cape, a cardigan or a jumper.

There are only about 45 rainy days a year in Marbella. Even in this cloudy weather, the average daytime temperature is +18 °C.

The best time for a vacation in Marbella is September, May and June, when the air temperature is +25 °C to +29°C. Rainfall is very rare at this time, and the average water temperature at sea is about +22 °C. That is what you need for comfortable bathing!

The average daytime temperature in summer is about 20 degrees. The “coldest” month of the summer is June. Then the temperature is gradually increasing during July and August, so the hot weather holds until the end of September.

The winter weather in Marbella 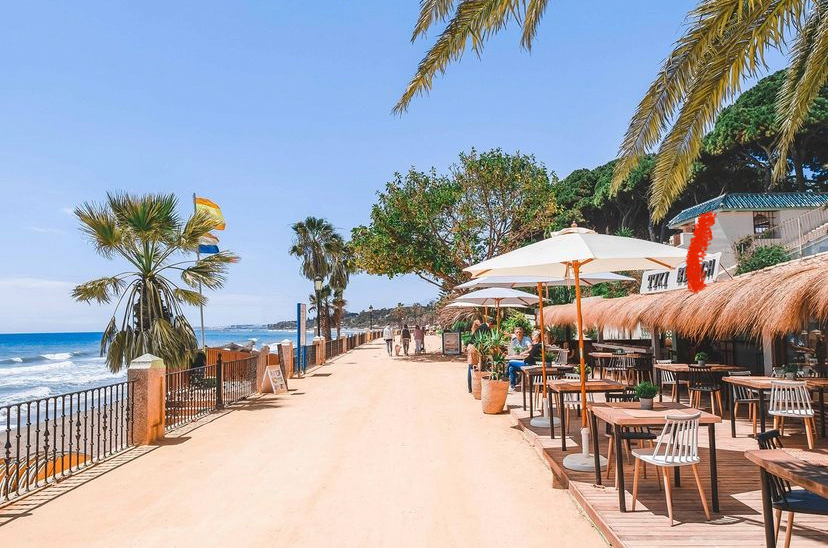 The average daytime temperature in Marbella in December is +17 °С, but it drops to +9 С° at night. The water temperature during the first winter month is still quite pleasant to wet feet, it is about +16 °С.

Marbella is a good place for wind and kite surfers in December. There are high tides during this time, and the average wind speed is about 3 meters per second. The Marbella December weather is the rainiest one. You need to be ready that it can rain for 3-4 days without stopping.

The general climate indicators in Marbella in winter are in the table:

The spring weather in Marbella

The air temperature of the city is gradually warming in March. On average, it warms to +13 °С in the daytime and to +11 °С at night. The sea is also slowly warming to +15 °С. Rainfall increases slightly in the first month of spring, but the wind speed stays the same, it’s about 3,1 meters per second.

April is the beginning of the tourist season at the resort. In the daytime thermometer stably reads +23 °С. However, the difference between the daytime and nighttime temperature is still significant (it is about 10 °С) and it stays till the middle of the month. The water temperature is about +16 °С at the time.

The Marbella weather in May is really summer. In fact, the first period for a wonderful vacation at the resort starts then. There is no heat yet, but the daytime/nighttime temperature balance is more than comfortable: + 22 и +15°С, respectively. You even can go diving in the coastal waters of Marbella from mid-May. The water warms to +18 °С and it’s comfortable enough. Rainfall is decreasing and it’s exactly the summer at the end of the month.

The climate indicators in spring are in the table:

The summer weather in Marbella

The summer in Marbella is the time when the weather reaches its peak. Nevertheless, you will not feel the boiling heat thanks to the cool water of the Mediterranean and the light sea breeze.

June is one of the most pleasant months of the year if we are talking about the weather. The average daytime temperature is almost +22 °С. At night, it slightly drops to +18 С°. The average water temperature is +19 °С. At this time, Marbella is filled with divers, who actively explore local underwater attractions.

Despite the wonderful weather in Marbella in June, there are still not so many tourists. That’s why prices in shops and restaurants are low, like in spring. However, they will start to rise significantly since July.

The hottest time in Marbella is July and August. At that time, the tourism season reaches its peak. And it is no wonder: The daytime temperature during this time is + 28 °С, at night it is +21 °С.

The water in the sea is the warmest; the average temperature is +20 °С. Therefore, the diving season goes on. However, it is not a good time for windsurfers, because the wind speed is not more than 2.7 m/s. Anyway, it’s OK to change a “windsurf” to a usual one, tidal waves are high enough for surfing, and you can find a lot of surfing schools for starters along the coastline. When the water is calm, you can try paddle surf – it is a board with a paddle, and it’s a good choice for a fascinating walk along the picturesque Marbella coastline.

The Marbella August weather is nearly the same as in July. There is no rainfall. In the daytime, the air warms to +29 °С, at night it is about + 22 °С. The sea is still warm.

How to spend a summer season in Marbella comfortably:

The climate indicators in summer are in the table:

The autumn weather in Marbella

The weather in Marbella in September is still summer. It is still very warm during the whole day, the average daytime temperature is about +27 °C, falling 5–6 °С at night, and the water temperature is 21 °С. However, you can feel autumn approaching because of the increasing amount of precipitation (from 5 mm in August it rises to 30 mm at the end of September).
At the beginning of October, the second-best vacation period with the calm and warm weather (the temperature is +23 °С, at night it is +16 °С) starts in Marbella. The water temperature is about +20 °С, and the amount of rainfall increases only at the end of the month.

The beach rest period ends completely in November. The maximum daytime temperature is +19°С, at night it drops to +12 °С. The water cools to +18 °С. Besides, the amount of rainy days in Marbella is slowly increasing. If you are going on a vacation at this time of year, do not forget to take some warm sweaters, an umbrella, or a raincoat.