Often compared to the playground of Miami, Marbella is the jewel of the Mediterranean. Discovered by the international jet set back in the late fifties (The Marbella Club was built in 1954 by Alfonso de Hohenlohe as a private residence, where he invited royalty, influential business associates and his social peers from Europe and The United States. In the late 1970´s he re-developed the property to become the Marbella Club as we know it today). 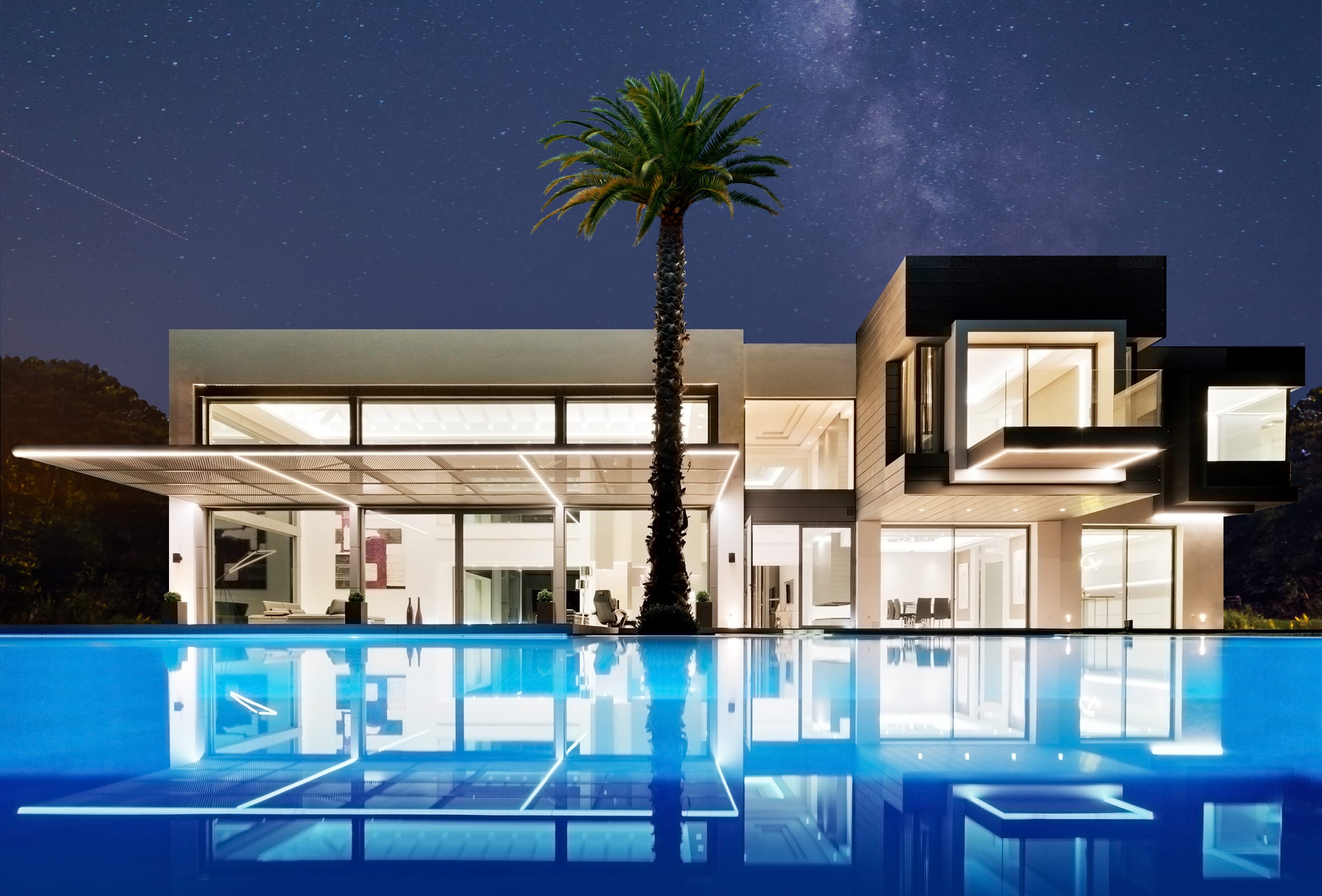 In reality, due to its glamourous appeal, Marbella is more akin to Beverly Hills and together with the fabulous climate, guarantees both visitors and residents the relaxing environment for which The Costa del Sol has been renowned for over five decades. Although both have glorious climates, Marbella trumps California with 320 days of sunshine each year, whereas Beverly Hills has forty days less with 280. The southern Spanish coast is well-known for its microclimate and sun-drenched beaches, similar to the lifestyle enjoyed by Californians, however it doesn´t have the freeways, the congestion and doesn´t take hours to travel to where you wish to eat, drink, work or relax. Beverly Hills is where you will find people who live the ‘real Hollywood movie lifestyle´, with their palatial homes, in which they find comfort in sheltering from the limelight and the myriad onlookers and celebrity hunters, this has earned the reputation of being the home of the ´A´ List celebrity crowd. It is here where you will also find The Beverly Hills Hotel, known to many as ´The Pink Palace´, which has welcomed some of the most celebrated personalities in history and in some cases, has been the home of some of Hollywood´s biggest names, such as Cary Grant and Douglas Fairbanks Jnr. David Niven and Errol  Flynn.

These stars were known to have resided there and called the hotel their home while looking to buy properties to suit their outlandish lifestyles. In comparison, Marbella has earned the same kudos, but in a much more understated way. The Marbella Club and her sister hotel, The Puente Romano, reflect the same opulence as the hotels in Beverly Hills and draw the same affluent audience. However, unlike Beverly Hills, all of the fabulous hotels in The Marbella area are located on the beach, whereas The Beverly Hills Hotel, The Beverly Wilshire and The Ermitage are located in the foothills above the thriving metropolis of Los Angeles. Marbella undoubtedly shares the glitz and glamour, but with very easy access where one can walk the palm treelined paseos, snaking along the shores of the Mediterranean. Whilst doing this you will experience the smell of sardines cooking on open fires, the chinking of glasses, the sun, sea, surf, and sangria, all adding to the relaxing ‘Manana attitude´, which is a far cry from the fast and furious pace of California.

For the last eighteen months Marbella has seen an increase in property prices across the board and is now regarded, once again, as one of the top tourist destinations in Europe. In August 2014, Hello Magazine stated that ‘Marbella has been voted the top destination for celebrities and the jet set and is now being labelled as Spain’s Beverly Hills. In addition, J.S. Marcus of The Wall Street Journal, recently wrote that ‘The ritzy, sun-soaked Spanish coastal city of Marbella is beginning to resemble Southern California more than Southern Spain,’ Beverly Hills has for over one hundred years gained its reputation for its vast stable of celebrities who reside, work or visit on a regular basis. Marbella has over the last fifty years, in half the time, achieved the same reputation in Europe.

In the past two years Sylvester Stallone, Jason Statham Wesley Snipes, Michelle Obama, Shirley Bassey, Eva Longoria, and Simon Cowell, who owns a lavish villa here. Not forgetting long-time resident and stalwart ambassador for Marbella; Antonio Banderas, who resides in a beachfront villa in Los Monteros. These are among the many other ‘A list’ stars who regard this golden coast as a home-from-home during the spring and summer season. The luxury property market here in Marbella mirrors that of Beverly Hills. The exclusive residential areas such as North Roxbury, Bedford, Camden, Rodeo Drives and in Bel Air, all of which can be likened to luxury real estate in Marbella’s La Zagaleta and El Madronal, where Sting and Rod Stewart stay whilst in Marbella, The Golden Mile, Sierra Blanca and Sotogrande with price tags to match. Although Beverly Hills does have a smattering of golf courses including the Bel-Air Country Club and The Los Angeles Country Club there are private courses and do not allow visitors to play without membership.

“The Marbella area has over 60 golf courses”

The Marbella area has over 60 golf courses, including the world renowned Valderrama course, host to The Ryder Cup and The Volvo Masters; it has been labeled ‘The Costa del Golf’. The Marbella Club is on par with The Beverly Wilshire Hotel, which was made even more famous with its location roll in the blockbuster movie ‘Pretty Woman’ starring Richard Gere and Julia Roberts. More than that, it is the favoured choice for thousands of celebrities, making its hallowed halls a veritable red carpet of its own. The Marbella Club reflects the same star-studded guest list including Audrey Hepburn, Cary Grant, Grace Kelly and Ava Gardner. The entrance or arrival is all important and nothing shows the personality of a person, whether famous, rich or understated, than the car or mode of transport in which they arrive. latest top of the range sports cars are always in public view. This competitive spirit is ever-present in both locations and needless to say, whilst either walking alongside the marina in Puerto Banus or on Rodeo Drive, the Aston Martins, Ferraris, Lamborghinis, Bentleys, Porsches and more are never out of sight or sound. Marbella luxury car showrooms have opened their arms wide to encompass this arena of hedonistic big boy toys Marbella is no exception and has opened its arms to wide to greet this arena of hedonistic big boy toys. Therefore, if price is not a concern, it is possible to find any vehicle whether it be on land or sea to buy or rent.

Recently C. de Salamanca, located in San Pedro de Alcantara, (near Marbella) was voted the chosen showroom by UK car Company Jaguar, to unveil their latest model – The Jaguar XE. Like cars, houses and hotels, shopping is extremely important to the wealthy traveler and there is no compromise made in Marbella. Puerto Banus, regarded as the Rodeo Drive of Southern Spain, is hailed as a Mecca for the discerning shopper. The Port over the last few years has undergone a major luxury facelift and now sees over 4 million visitors visiting this exclusive seaside mall of the most well-known global brands. All of the major names are on parade and even the most seasoned of retail therapists, will not be disappointed. Brands include: Gucci, Chanel, Agent Provocateur, Brioni, Bulgari, Cartier, Dolce & Gabbana, Ermenegildo Zegna, Fendi, Louis Vuitton, Versace, Jimmy Choo, Tods, Burberry, Salvatore Ferragamo and La Perla among many others.

Whilst the Costa del Sol is aptly translated as ‘The Sunshine Coast’, Beverly Hills, California is commonly known as ‘The Golden State’. The Golden Mile, home to The Marbella Club, Puente Romano and some of the best restaurants and clubs on the coast, reflect the similarity in both destinations. This similarity between the two has drawn many people to spend time in both Marbella and Beverly Hills with a large influx of celebrities actively looking for property to buy on the Costa del Sol last year. This we confidently feel after hearing that Brad Pitt and Angelina Jolie were exploring the market for a finca or hillside villa in the Marbella area in 2014 and 2015. We believe that in 2016, we will see a further increase in high earning buyers gracing the Spanish shores to do the same.

1150000
This fabulous place will be highly desirable for people who value comfort, beauty and tranquil setting! Made for luxurious living and entertaining, the elegant Mediterranean...

1700000
This wonderful luxury property offered for sale and for rent is located in the peaceful frontline beach complex in the prestigious of eastern Marbella. Privacy, peace, proximity...

Luxury apartment by the sea, Malibu

1990000
This apartment of 247 m2 is located in Malibu, a private gated community with 24h security, swimming pools of saltwater and freshwater, waterfalls, landscaped subtropical...

4950000
This traditional Mediterranean- style villa with an unbeatable southern charm is nestled in super prestigious Zagaleta. When it comes to the truly unique, magnificent areas...

5950000
This luxury villa with infinity swimming pool and fantastic panoramic views towards the sea and mountains is located in the protected natural area of La Zagaleta Country Club,...

6995000
Сreated by the famous architects, this stunning contemporary masterpiece in a very prestigious and beautiful location is waiting for a special discerning buyer who knows what...